Sale Typical Salento Masseria dating back to 1700, 1 km from the sea of San Gregorio, Leuca - Patù

D'AMICO IMMOBILIARE offers for sale Masseria dating back to 1700 with the typical charm of Salento. It is located in its original state, and has a covered area of about 150 square meters. The property for sale is in good condition. Only in some rooms the roof collapsed, because at the time they were made with wooden beams, channeled and tiles, so, they must be restored. Some of the rooms were used as dwellings of Massaro, (farmer and cattle breeder) others, stables and barns.

Not far from the farm for sale there is an old Parmento, used for the pressing of grapes, and an ancient underground cistern, excavated by hand. The surrounding garden measures an area of about 1500 square meters, and is characterized by the presence of some olive trees, almond trees, figs and prickly pears. The Masseria is arranged all around an internal courtyard. The property is suitable for use, both as a historic private residence, both as a B&B. Or as an Inn or Trattoria. It has an entrance on a main road, and one on a secondary dirt road. In addition to the existing building, you can build a Swimming Pool and porches and various pergolas. The farm for sale is only 1 kilometer from the sea of San Gregorio and 2 kilometers from Patù.

Contact us and we will realize for you,  turnkey, renovation and completion works according to your wishes... All this with D'AMICO IMMOBILIARE !

The Masseria for sale is in San Gregorio, seaside resort of Patù

The town of Patù is 126 kilometers from the Airport of Salento (Brindisi). The small village is located at the extreme edge of Capo di Leuca, at the foot of the hill of Vereto.

According to historians, the name Patù derives from the Greek pathos (suffering, pain). In fact, it would remember the suffering of the city of Vereto (Veretum), destroyed by the Saracens, from which the village was born. Among the most important historical sites we mention the archaeological one with the remains of the Messapian city of Vereto, "the Centopietre" and the staircase and the Messapian port in the Bay of San Gregorio, marina di Patù, only 4 kilometers away from it.

Vereto is an ancient Messapian city located a short distance from the town. It is located on a small hill. The city was an important center for trade, both with Greece and with Magna Grecia. It became a Roman municipality and then was razed to the ground in the ninth century by the Saracens. Of this center remain some monumental testimonies as the foundations of the walls that encircled the city and several burials.

In the Bay of San Gregorio, marina of Patù, and distant from it only 4 kilometers, once there was the port of the city of Vereto. On the spot, in fact, the remains of a staircase of Messapian origin and well for the supply of fresh water are still visible.

The Centopietre is an ancient funerary monument, declared National Monument of second class in 1873. Dating back to the ninth century, it was built to bury the remains of the Geminian knight.  Messenger of peace killed by the Saracens just before the final battle of June 24, 877, between Christians and Muslims. The rectangular structure is built with 100 blocks of limestone from the Messapian city of Vereto. Inside it has several overlapping layers of frescoes on sacred subjects dating back to the fourteenth century.

Patù overlooks the Ionian Sea for about 3 km with the resorts of Felloniche and Torre San Gregorio (seaside resort that houses various accommodation facilities). The entire municipal area is subject to landscape constraints for the natural composition characterized by Mediterranean scrub and local essences and for the presence of ancient monuments of inestimable aesthetic and traditional value as the pajare. Important is the presence of flora typical of the place as the Alisso di Leuca, thyme, myrtle and various species of wild orchids. 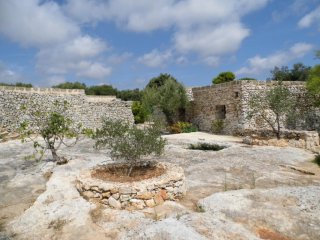 Ancient village in Pozzo Volito, surrounded by greenery of Salento 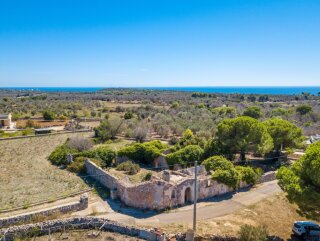 Masseria in Salento in Patù